Upendra made a comeback as a director after 10 long years with the Kannada film, ‘Super’. People were waiting to watch his film. One among them was none other than the Superstar of Indian Cinema, Rajnikanth. On Thursday, 29th January, Rajnikanth visited the Renukamba theatre in Malleshwaram (Bangalore) and watched the film.

The story does not end here. It actually just begins here. Rajnikanth expressed his like for Upendra, his creativity and his films explicity to the media. He went on to say that the movie was really nice and he absolutely loved the first few minutes of the film. Rajni did not think twice before saying that if there was anyone in India who could think of making something like this, it had to be Upendra.

‘Super’ stars Upendra and Nayantara in the lead role and has been produced under the Rockline Productions banner. The movie is due to release in Telugu and Tamil as well in a few weeks. There are reports that filmmakers have been asking for its rights in Hindi. That apart, I rate this film very high and completely agree with Thalaiva – If there was anyone who could think of making such a film, it has to be Upendra. He also said that Upendra is a great actor and director and that there is hardly anyone like him in Indian cinema. Afterall, Upendra had made something like Rajni’s latest sensation ‘Enthiran’ long ago. He apparently had discussed the script as well with Shankar back then. That is the foresight that this man has.

Well, the media did not stop from asking Rajnikanth on when could they see him next in a Kannada film; after all he had his humble beginnings here. He politely replied that if he gets a good script and a good role then he would surely do so. Oh yes, he also said if Upendra could give him something nice, he would surely go ahead with it. Reports also suggest that post this Upendra will be meeting Rajnikanth today to discuss something! Well, if it all works out then we will have Rajni re create the magic in Kannada all over again. 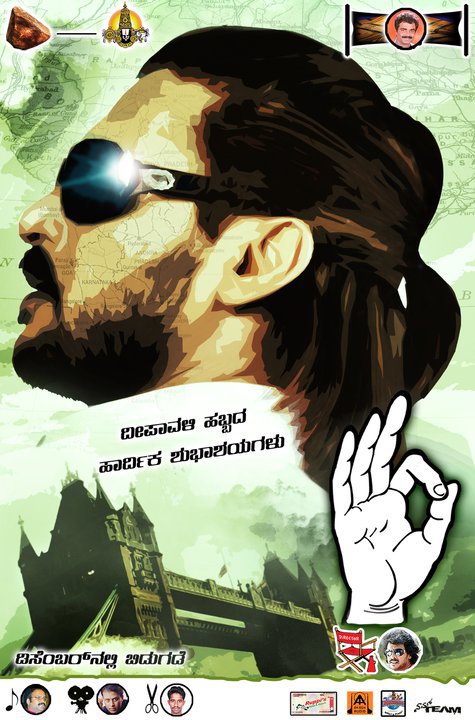 Rajnikanth also dismissed the rumours that he would be a part of Prem’s Shivraj Kumar starrer ‘Jogayya’. He said that he is still looking for a good script and would be willing to star in Kannada movies again! I am waiting for that day when Rajni would come back here and be a part of the Kannada film fraternity all over again.

Lastly, if you could ever follow Kannada then please go ahead and watch ‘Super’. It is a movie that will force you to think differently. Upendra’s creativity is something that will surprise you and make your day.