A colleague of ours suggested we try Soo Ra Sang, a Korean restaurant very close to office (HAL 3rd stage) and we decided to head there along with his family and another colleague. What bowled me over the minute I called to reserve a table, was the hospitality or approach. They immediately sent a text message with their address back to the number that I had called from. They called back, to ask, if I had been there earlier and had doubts about the way they serve the food. At that point, I said, yes, since my colleague had been there and was already very confident that we would like the place.

Well, when we went there, the interiors impressed me.  I loved the seating. The tables didn’t have chairs rather they had benches that seemed fixed. It was a complete square which had another smaller square desk for dining! Brilliant! Then, I happened to meet the lady who runs the place, Yong. Initially, I was slightly intimidated with her approach as I considered her to be unfriendly. But it was only after she started talking that I realized that it was only her passion, dedication and quality that made her seem like that.

Well, the menu seemed limited and I was a little upset that there were no starters. At this point, Yong explained that they serve the starters alongside every dish we order. She suggested I take the world famous Korean dish, ‘Bi Bim Bap’. My colleague’s wife, Rachel, also recommended that as she had tried it in the past. Well, as Rachel pointed out, to a layman, it was sizzling, spicy red fried rice. I’m sure Yong disagreed with our point of view. She then explained that it was steamed rice topped with vegetables and garnished with an egg (sunny side up).  Sunny chose to have green chili pork (as always, pork gets top priority), Santa picked pork too, but with red chili gravy and Abhinav called for Omurice .

The tables had tiny green plates with white tumblers. Yong got us a bottle of cold water. We poured it in and realized it wasn’t plain water. It was flavored with sweet corn.  We certainly had enough refills of that. Our dishes started coming.

First, they brought a series of starters and arranged it on our table (all vegetarian). White cutlery with picked vegetables, salads, soya, Kim Chi and other Korean short eats just looked fabulous! What a beauty that was! While we were wondering if the cabbage in the Kim Chi was rather different and long, the steward walked up to the table and literally cut them into smaller bits!! Man, it was delicious. Perfectly pickled with the spices, this was a very different and tasty Kim Chi. There was a dish that looked like pineapple and I grabbed it. Well, it turned out that I was wrong in my judgment. It was radish!! Yet, it was worth salivating for. Every tiny bit that was on the table was brilliant and the best part was that all of it was unlimited. The portion would get refilled for as many times as we want.

The Bi Bim Bap was brought to the table in a sizzling black bowl. Rachel and I had both ordered the same, hers was chicken and mine was vegetarian.  Like Yong had explained it was steamed rice, with vegetables and an egg. They also brought in a tiny plate of red chili sauce and a bottle of ketchup. The steward said, he would mix it was it was not meant to be had the way it was served. He put in so much pressure to blend in the ingredients. I was just waiting for him to hand over the dish to me as I had begun salivating by then. By far, one of the best rice dishes I have ever had. They also served clear vegetable soup alongside.  Yong suggested that we sip the soup when the rice left a dry taste. Well, I just didn’t know which one to have and which one to keep for later. Since it was served in a sizzler kind of bowl, some portion of the mixed rice was slightly burnt making it crispier than the rest. Yes, I also subconsciously agreed with how Rachel had described it as that is probably the most apt description. The dish had so many textures and flavors to it that it soon became one of my favorites all time tries! 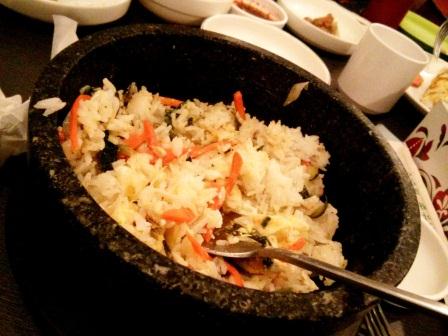 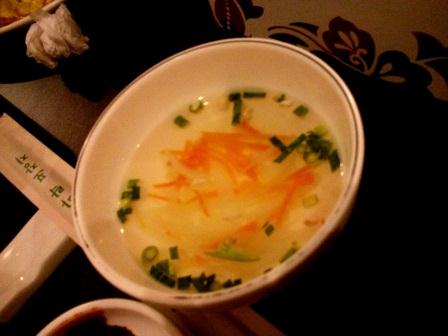 The pork Sunny ordered was apparently one of the best he had ever had. His was dry and was served with green chilies. He too loved the texture and said it was really different. Santa’s pork was really different. It had more of gravy and was served in the sizzler bowl, so it was boiling away! The Omurice was wrapped in an egg and Abhinav claimed it was way better than the Bi Bim Bap. 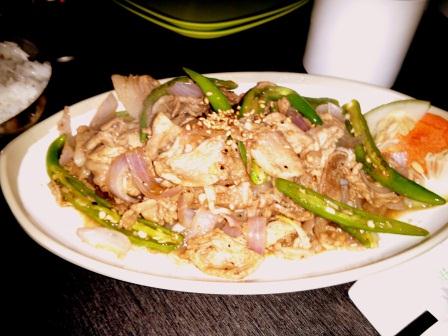 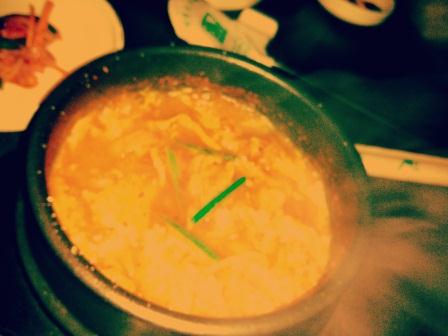 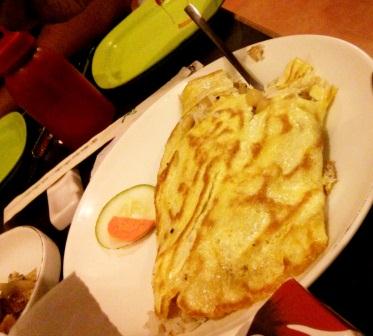 I was thinking of what I would do for a dessert though the quantity of rice served was much more that what I could eat. Yong then, got us tiny bowls of a honey colored liquid. That was, SooJungGwa, a Korean sweet dish made of cinnamon and brown sugar.  That was heavenly and it’s surely going to be tried out in the kitchen soon. 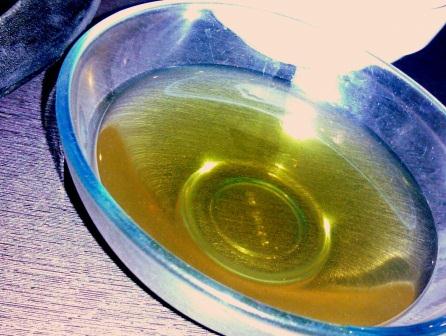 The entire experience was truly overwhelming. I would say, the pricing too, was great. Each of the dishes would vary between Rs. 450 – 500. But yes, it was surely worth it as you get the starters and the desserts along with it!! I would rate Soo Ra Sang a 4.5/5 and yes, if you are the types to experiment, then do pay a visit.