Every time I would cross Garuda Mall I would notice Braai and would want to go there purely on the basis of how they had differentiated themselves – grill s and griddle. I knew I could expect food like BBQ Nation – spicy, tasty, ‘not so-fatty’, sans cheese and more than sufficient. Finally went there this weekend.

When I walked into Braai, I was blown away with the ambience. Yellow walls, low seating, colourful cushions, puppets hanging, one truck sort of projection tucked into the corner and most interesting of all, their ceiling – completely done up with glass bangles. I fell in love with it. The tables, like BBQ Nation had provision for 2 live griddles. 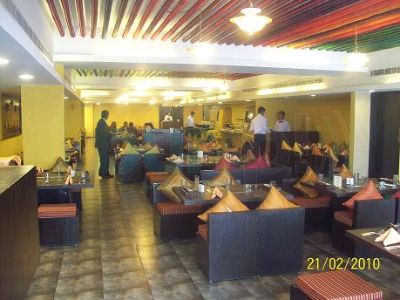 As we settled down, the supervisor at Braai came to our table to explain what they had to offer – there were 3 kinds of buffets – Sea Food (included sea food grills and starters; priced at Rs.500 ), Chicken (Rs. 329) and Vegetarian (Rs. 329). My friends opted for the sea food one and I as always went in for the veg. We also asked if they would serve the soup on the table for which he politely explained, “We do not serve the soup on the table. Everything else is like BBQ Nation”.  At that point we thought he knew his positioning also well. In just one sentence he could explain what we had to expect. Well, our starters arrived.

The Paneer came in first.  While I was waiting for the paneer to heat up, the rest followed – fish, prawns, chicken sheek kabab (I guess), mutton and those large chicken pieces. They got in some cauliflower, veg tikkis, mushroom and baby potatoes and tiny coin like parathas. I was thrilled. The paneer was good. So were the cauliflower and the potato. No real complaints about that. The non veg., I believe was mediocre. They didn’t really enjoy it as much as I was relishing my gobi! I repeatedly asked for gobi and aloo. So did they!! I absolutely loved them.

Once I was relatively full, I moved to the rest of the spread. Salads, soups, main course and desserts. None of them seemed nice. Salads had options of Russian salad, macaroni and cheese and some other vegetables. The soup seemed uninteresting – tomato dhaniya soup and chicken manchow.  The main course was worse. Aloo-gobi, paneer kadai, babycorn jalfrezhi, pulao and daal. Though the names seemed nice they looked horrifying. I picked up a little pulao and daal. My friends choose not to pick a single item from the non-veg. section. They stuck to their soup and salads. Apparently the soup was awful. My rice was just edible. 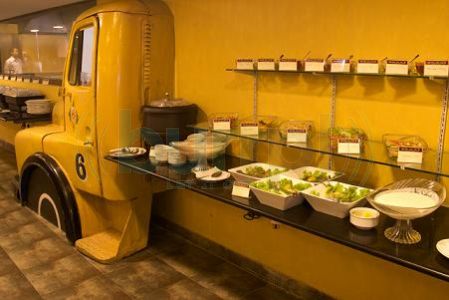 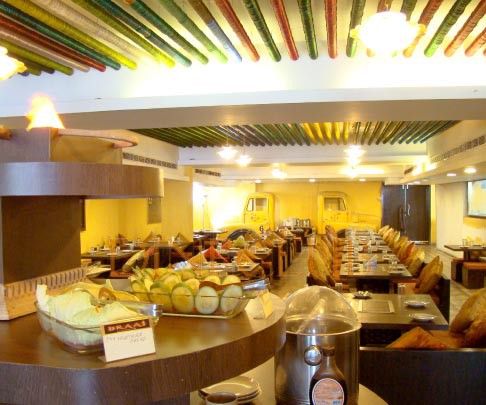 I took a look at the desserts and was further disappointed. Nothing seemed interesting. Nothing made me go gaga! Malpua, gulab jamoon, some chocolate pastry, kheer, rabadi and icecream. I still picked up malpua and gulab jamoon. Both were below average.

By the end of the meal, we were like – they could have done so much with such a beautiful place. It was one awful meal. I am hoping they improve soon. If you go there, then keep in mind that you cannot expect great food. The place looks awesome but the food, well, not worth the money. And yes, it’s just a wannabe BBQ Nation and I personally hate all wannabes!