Things I need to make clear before I go any further:

Now, imagine I got to do it all together. Yes, that did happen and I loved the experience.  Few of my close friends belong to Bhubaneswar (Orissa) and had been raving about their cuisine since a long time now.

Finally, we decided to meet up at BBSR for the weekend and just let go of everything else and EAT!! Yes, we travelled all the way to please our taste buds and our tummies! We landed and were heading to one of our friends houses at BBSR when we said; let’s begin our journey right away. At CRP (a place in BBSR) there was this vendor selling Daha Wada and Aloo  Dum and that I had heard was something one had to eat while at BBSR. So, be it. We got down and asked for it.  Around 4 wadas soaked in dahi were arranged on a plate and were then topped with one single large wada to form what I call the yummiest pyramid . While he was arranging them I started developing this craving to gulp it. My friend who was there after almost 6 years almost had an emotional outburst and the excitement could be seen all over his face!! Then the vendor added some aloo dum with yellow peas, a few chutneys and some more dahi. It is beyond yummy!! Trust me, the dahi wada is something which is very different from what we get here in the south. It is a MUST HAVE if you are there. And all of this cost us just Rs. 15 per plate!!

Next, we were supposed to eat at a traditional Odiya restaurant. However that was closed for the day. We ended up eating at Daalma. My friends had Fish and Non-Veg meals. I had the Veg thali and Aloo Gobi. I have become a huge fan of Dalma (a combination of daal and vegetables). Finally I had these sweet – Rasabhalla (or something like that) which according to them is baked cheese which is later fried and dipped in sugar syrup. Heaven!!!  I wish I could accommodate another of that. After all, the tummy is not a suitcase that you can over stuff it and try and somehow zip it.

We then moved to Puri. At the Puri beach, my friend had advised us to try the Jhal Muri (similar to the Bhel Puri). That was great too. Since it was evening we thought we would have some Chai at the beach.  The vendor there was sitting on the sand with this huge aluminum open drum inside which there was charcoal burning bright. He had a tea pot on the coal. He took out a glass, mixed a little water and milk powder, brewed the tea and served it to us. I can assure you that this was by far one of the most amazing experiences. Seeing that man make tea is something that amazed me so much that I was just glad that I managed to make this trip. Amazing tea, great friends and the beach right in front of us – Could I have asked for a better weekend?

We then headed to the Puri temple. The temple food was something that took me by a surprise. We tried their kheer, a kind of buttermilk and daal. Needless to say, I am still wondering how they manage to serve such great food at such a low cost. Anyone can over eat and enjoy a great meal with just Rs. 10 in hand at the Puri Temple.

We stayed over at Puri that night and on our way back next morning we stopped somewhere near Neemapara (I hope I got the place right) to have Chennajhilli. Now, there is something I need to elaborate. Odiya sweets predominantly have Chenna in them which is like a stage in between cottage cheese, cheese and cream. It’s yummy even in its purest form. They then burn it, steam it or bake it to make various sweets. So, Chennajhili was just steamed chenna.

One of my friends is a huge fan of the German Silk Cake at a hotel called Mayfair in BBSR. He had described the cake so beautifully to me that every time I would think of it I would want to have it. We had ordered it the day we left for Puri. On our way back, we stopped by to pick it up. A rich chocolate cake microwaved to become slightly gooey and scoops of molten chocolate sauced added over it and further microwaved. It was really death by chocolate.

We then went over to my friend’s place where his mom had made some yummy mutton. For me she made this delicious egg curry and daal. Since I am a huge fan of eggs I chose the egg curry over the daal and underestimate its worth. But when I started eating the daal, I was just so satisfied. By now we were beyond full so we quickly grabbed a nap and headed for our evening ‘I love food’ ritual.

Gupchup – Odiya style Paani Puri was on the Must Have List. We stopped by the Market Building to have the gupchup. Each of us must have easily had 10 each and were willing to have more. But then, we had to save place for the rest. They are indeed the best paani puris you could get. My friends always told me that once you have the gupchup there you will realize how much more amazing paani puri can get. Today, I completely agree with them. There is nothing that is as delicious as that. The vendor will first hand over a leaf that he would tweak to making it a cup. Then he would customize the aloo to your requirement. The aloo is neither very dry nor soggy and I think what makes it very different is the taste that yellow peas adds to it. Then comes the paani – Wow!! Mind blowing; neither too spicy nor too tangy.  The Sukha that they give at the end just amazes me – They make one, and then top it up with another puri. It’s just out of this world.

After having such brilliant gupchup, we had a kesar badaam kulfi at Narulas. This is probably the only thing that I thought was better in Bangalore. We then went to Ruchika market to have Chaat. Mind you, when I say Chaat I don’t mean the regular sev puri or bhel. It’s a combination of various layers into one item that is simply called chaat. There was paapdi that was broken, then some red colour liquid was added, some alloo, onions and other vegatables, puri was broken and added into it. A dahi wada was dropped it and it was finally dressed with some chutneys. A dish that can be extremely filling yet nice. I however did not eat much as I was already full and I did not particularly love it as much.

At night we went to this place called Pahalla which comes in between BBSR and Cuttack. There are a line of vendors who make fresh Rasagollas and transport it to the retailers in the city. These boys would always tell me that there is a large bias when it comes to rasagollas. Bengalis and Odiya people always have a rift about this. They used to claim that if one had not had Odiya rasagollas then one had actually not had rasagollas at all. Indeed he was right. Each vendor probably makes around 5000 every night. They will first make the chenna and then fry them and serve them HOT. The juice just oozes out when you put it in your mouth and it literally melts away. I am not exaggerating but seriously that is how good it was. And now I repeat what my friends always professed – if you have not had the rasagollas from there then you have not had rasagollas at all 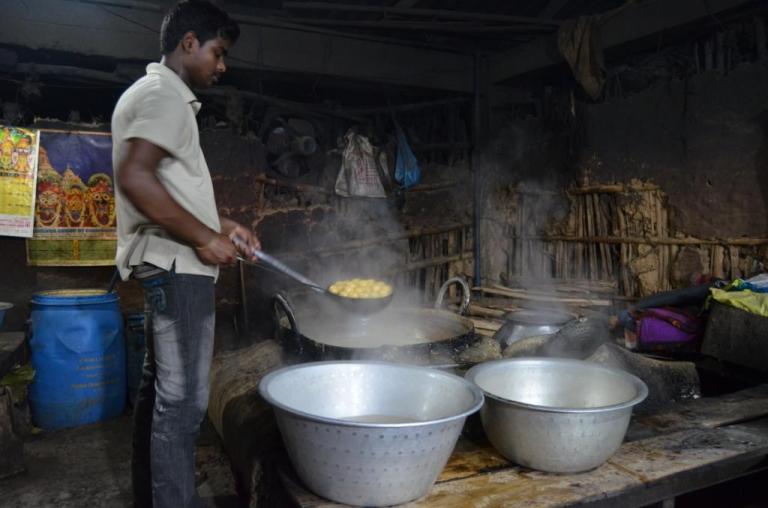 Then came our last day – a day which we began by having a lavish breakfast at Mayfair’s Teapot. A great spread that had almost everything from juices to salads to dosas to upma to mashed potatoes to eggs to waffles to sandwiches. Then we indulged in some more gupchup and finally went home for lunch. Aunty had made this traditional Odiya dish called pakhal (again, I might be wrong with the spelling). Rice that seems like it was soaked in water and then loaded with curd. To accompany it there were a fried dish made from pumpkin flowers, another dish of potato and bitter gourd, then chuda, green leafy vegetables and drumsticks. It’s probably the best sleep inducing meal. I so badly wanted to crash after that but chose not to.

It was time to bid farewell to this amazing culinary journey and head back. At that time my friend quickly stopped by at a sweet stall to make me have chennapodo – desi cheese cake!

From fine dining to street food indulgence to savoring the taste of home cooked meal; we had done it all. It was indeed a trip that I will never forget for all the food that I have had. I loved the food and I am glad I could do a trip like this!!  I owe a big thanks to my friends – Durgesh Kumar Singh and Sunny Saxena who made it happen and another one to Kiran Panigrahi for suggesting the German Silk Cake.

(P.S: Except the Chennapodo image the rest are all courtesy Durgesh Kumar Singh)