I have wanted to pen down my UID experience for a while but I always thought I would do it once the entire procedure is completed. However, it looks like it would take longer for that to happen. So, here goes the write up.

To begin with, let me begin with sharing some information about UID that I know. UID is an Unique Identification Number issued by the Unique Identification Authority of India (UIDAI).  It falls under the Government’s Aadhaar Project envisaged to bring in a multi- purpose identification card. UID is not mandatory but it would help in making transactions smoother. From the government’s point of view, it is their attempt at creating a unique id for everyone in order to do away with various fake ids that are floating in the market. It to an extent brings in standardization. UID is a 12 digit unique number which will be stored in a centralized database. It was first implemented in a tribal village in Maharashtra in September 2010. UID collects basic information of demographics and biometrics like photograph, ten fingerprints and iris scan. 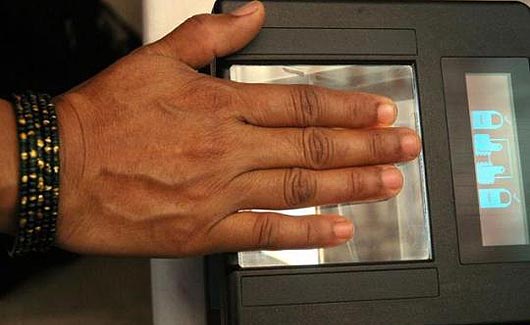 Why was I so keen on getting it done? Well, it is headed by Nandan Nilekani. Could I not want to see how corporate icons are gelling into the government allotted roles. Being the ‘enthucutlet’ amongst my family and friends, I knew I had to get this done asap. I tried to convince my father to join in with me but he insisted that he would do it after mine. The day I read in The Times of India that they had started enrolling people for Bangalore I rushed to the nearest authorized post office. Initially there were only 9 post offices that were authorized for the project. There started my nightmare.

The post office staff refused to give me an application as they were busy getting their own enrollment. It was a Saturday. They bluntly refused and asked me to come on Monday to collect the forms. So, I went back on at 9 am on Monday. This time, they said, they ran out of forms. If they started issuing on Monday morning there is no way they could run out of forms. Anyway, they said that I could get a photocopy of the application form from the Xerox store next door. Beginning of a scam. A normal Re.1 photocopy was being charged Rs. 2. I did buy it. Filled it in and went back to submit it with my passport copy. The line to submit seemed long enough.

Once I submitted the form, I was given a token number and was asked to come back a few days later for the finger prints and Id verification. I went the next day to submit my father’s application and they said they had stopped accepting any more applications. I was given a date and time when I could come and submit the same. The slot I got was a month and a half later. Also, I guess, the photocopy scam was identified. They had also mentioned that on that day, if there were original forms then one would have to stand in the queue to collect the original, fill it in and stand again in another queue to submit it.

I moved on to my verification. Each person’s verification takes at least 15 minutes. They check your originals and then begin the biometric scans. The fingerprint scanner and the iris scanner take a real long time. Then they refill an electronic form both in English and in Kannada. Kannada usually takes longer. Post that, they issue a print out as an acknowledgement. I was told that the number would be sent by snail mail to my address within 45 days. I am still waiting for that eagerly. However, I was at peace that I had completed it from my end.

I did notice a lot of glitches at the execution levels. First and foremost – it was a cumbersome 3 part process. Since only a few places were authorized to do so, it became very inconvenient. The barrier of technology know- hows seemed to come in the way. It was rather difficult from them to get the scans done seamlessly. There was no separate queue initially for senior citizens though the paper had said that. It would be rather unfair if they had to stand in queues for hours. I think they are working on each of these and now the procedure might have been simplified.

I sincerely urge all of you to get your UID.I could hardly see anyone of my age in the queue. It would be great if we take a call and get more responsible and cooperate with the government in making a better society.