If you thought he managed to do a good job of depicting the road-side struggling graduate in Band Baaja Baraat, then hold on, Ranveer Singh will surely take you by a surprise yet again.. This time, his oh-so-cool Neal Caffrey inspired looks, amazing stubble and yes, a body to die for will woo each and every girl. Ladies v/s Ricky Bahl is a film is absolutely pleasing for the eyes! 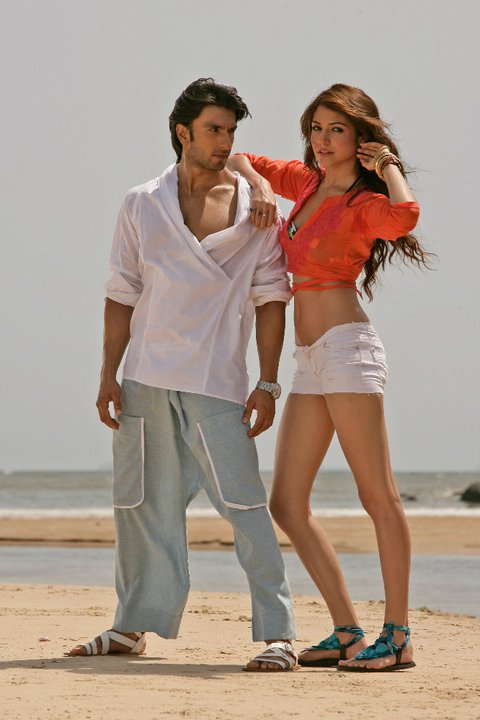 The first half is impressive. Though you soon know what to expect, Habib Faisal’s dialogues, the screenplay and the acting keep you occupied. The supporting cast acts as a great foil the content of the film and make it entertaining. As always, I choose not to write about the plot hence all I can reveal is that you will surely not be able to contain your laughter when the first ‘lady’ is on screen. Parineeti Chopra made me love the fact that she says LOL like doll. She has etched the stereotype of a dilli girl in my mind forever now!! Yes, she was brilliant. The mischief in her eyes, the chirpiness in her voice and the demanding tone makes you just accept that there could not have been a better option.

The other 2 women are impressive as well. Dipannita Sharma looks glamorous and very corportish. She does remind you of a Bipasha Basu in Corporate – strong willed, capable, talented, beautiful, hot, dressed to kill yet a woman at heart. Next in line is Aditi Sharma who like her character is simple, subtle, homely, beautiful and still desirable.

Finally, the director Maneesh Sharma brings on his leading lady, Anushka Sharma. Somehow, I feel the song that introduces her could have been avoided. It reminded me of the 90s at various points – the need to have a song to introduce the heroine; expressions & treatment that made me wonder if the brief for the choreographer was to try and make a song as close as ‘Mere Khwabon Mein Jo Aaye’  from DDLJ and so on. However, she fails to live up to the likes of a ‘Kajol’. Unlike BBB where her performance was the key player of the film, here it’s her looks. Yes, she does look hot, sexy and sultry in her black bikini.  That is all that I would want to focus on as her performance has nothing concrete. Actually the script at that point too is rather weak, predictable and sluggish. However, one can forgive this and just enjoy scenes from Goa, re-live the Baazigar moments, go ‘oo ah’ over both Ranveer and Anushka & yes, try and get a wardrobe list done!

If one could ignore the desperately included songs, some clichés then one can enjoy a good break from one’s moronic and mechanical routine corporate life (hint: I’m giving you a sneak peek into my own life these days)