It’s not a film.. It’s a beautiful poem! A saga of romance, betrayal and desire set against a backdrop of turbulent times in Indian history, Lootera redefines various aspects of film making. In simple words – it’s a masterpiece. Vikramaditya Motwane’s hold on the craft is remarkable and it reflects through every single frame and moment of the film. 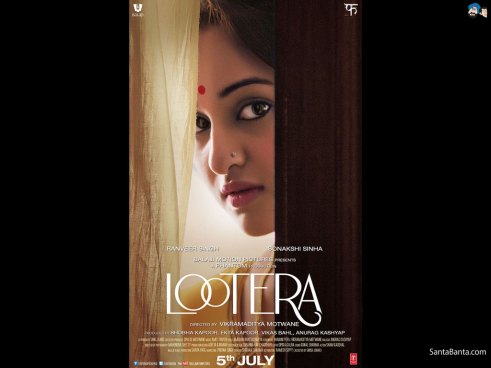 There is a spell that Vikramaditya Motwane casts right at the beginning of the film that leaves the audience mesmerized and this spell continues till the end and lingers on the mind for days after watching it. There isn’t so much of a story but it’s the craft that leaves you spellbound. Central to the film are its references and depictions of art, literature, tradition, language, music and culture that beautifully mirror the times that it was set in (1950s).

I would not want to reveal anything beyond stating the obvious (through what is shown in the trailer) that it opens in West Bengal during the times when the princely states began seeing the power of democracy. So, yes, there is Zameendar Babu, there is a majdoor and there is the love story. And yes, it’s inspired by O.Henry’s short story, The Last Leaf.

Sonakshi Sinha sizzles through the film. Sensuous and appealing, one can’t take their eyes off her even for a moment! Ranveer Singh shows how he’s moved on from the Band Baaja days to serious acting days. Their love story is mostly expressed through exchange of looks and gestures. Motwane manages to capture the art of love making so skillfully and mind you, in just one scene!! I fell in love with his style of film making!

Lootera is a film that builds along with the music of the film. Amit Trivedi’s compositions add so much value to the film. They foil the stories almost effortlessly and transports one into a completely different time!! The violin interludes are occasional in the beginning and get more frequent as the film progresses and so does the audience’s craving for it!! Absolute brilliance! Did I forget to mention about Amitabh Bhattacharya? Well, there is no Amit Trivedi without him I guess! His lyrics, as always, compliments Trivedi’s music making each track special. (For those who are yet to hear the music – here’s what you need to do – http://www.saavn.com/s/#!/p/album/hindi/Lootera-2013/c1pfepzl6hU_)

What is also excellent is the cinematography by Mahendra Shetty. His camera captures the landscapes so well that it almost looks like there is another love story that he wants to narrate – the tale of his lens and its love for landscapes. Well, it’s not just the landscapes that are well shot; even the somber parts of the film get more than justice by the lens. Oh yes, like I mentioned earlier, he also manages to woo the audience in the way he has shot the intense and sensuous parts of the film! I have not seen such smoldering portrayal in a while.

I absolutely was in awe of the production design. Each prop seemed like it was just pulled out of history and placed there! The costumes too were impressive. Bengal cotton sarees and impressive formal wear for the men just added to each of their roles and characters.

Motwane has managed to showcase his film with just the right mix of everything – lighting, camera, costumes, performance, support cast, production design, script, make-up and music. It’s a film for the romantics. Do watch it to know how a simple story can be dealt with so skillfully. You’ll love it!!

(Also, remember, behind all of this is a giant who supports good film-making!! “F se Phantom”)