An Anurag Kashyap film. What does this mean to you? To me it means dark and strong enough to leave you pondering. Shaitan, though directed by Bejoy Nambiar, does have some essence of Anurag Kashyap in it. I however think Nambiar has a great work against his name now.

Issues integral to the film make you wonder that at some point you would have expected the rich and spoilt kids to behave that way. But hold on. You don’t know what is to follow. There are 2 stories that run parallel in the film that act as a foil to one another. One is a tale of a gang of 5 college kids mostly from wealthy and dysfunctional homes and another is of a cop trying to fight his anger and stay grounded amidst a divorce proceeding. The two intertwine to give you a lot to think over.

The first half of the film is very engaging. The complicated and distinct characteristics are highlighted with dark and warm hues of the camera. As they begin to develop you will actually start liking the evil side that exists in each of them for initially the vice does not really seem that bad. Happiness seems to be the highlight in their lives then. Slowly, as the film builds you are hit by how bad the evil can get. From that point on it is a constant fight that one sees on how they try to confront the evil and how worse it can get.

What I found very striking was the music. It is so captivating that you actually get completely soaked in and start to relate to the evil side of every character. I personally loved the Khoya Khoya Chand track that was set against slow moves. That just did it for me. I agree that it was not the same like listening to Amit Trivedi. But hell, it was awesome. At the end of the film, I didn’t really think why Amit Trivedi was not a part of the project (If you are wondering why I’m talking about Amit Trivedi, it’s because somehow I expect Amit Trivedi to be a part of every Anurag Kashyap venture. Strange, but ya, I expect it, especially post Udaan).

Oh yes, there is one more important part that I had to mention. Sorry, if I’m revealing too much of the film. But there is this one tiff that happens between Rajeev Khandelwal and a random auto driver. I absolutely loved the fact that the autowala was set right with one kick. That was a moment of liberation!! Also, for all of us who grew up watching Yash Raj films, Anurag and Bejoy have given a new nomenclature to one of YSR’s all time hits – Dildo Pagal Hai. Until now, I would always remember this as a viral joke that runs in the south. They always ask you, how does a Malayalee say Dil To Pagal Hai and the answer was Dlido Pagal. Now, it’s officially seen on the big screen replacing the Malayalee with a crazy vibrator. So, yes, this made me wonder if Nambiar had heard it in the past. Nevertheless, who cares. It is one of those moments in the film where you would want to tell yourself ‘mainstream cinema – whatever’. I loved the timing though. I also jumped up in joy when I saw the board of a Birdy’s outlet in the background. The foodie in me was wondering if I could get myself a brownie from there during the interval. 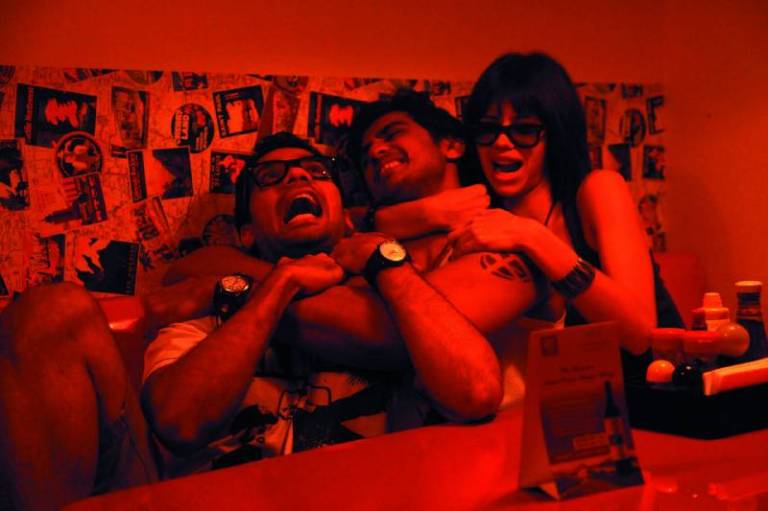 The film has some amazing intricacies that will make you fall in love with it. I’m sure most of us would have done crazy things during our post-teen and welcome adolescent phase. Some of us might have been involved in complicated situations like these in our pursuit of adopting bliss as the language of our life. However, I’m sure all of us at some point would have confronted the Shaitan in us. For everyone who has confronted the evil, this is a movie for you.

I still think the plot was left hanging. It could have been taken forward to another level. The second half was not as gripping as the first. But, then, all’s good. The movie does deserve credit for what it is. For once, I think I should not complain about what was missing and appreciate what was there. It’s a brilliant attempt and I can only say that I could not have expected anyone else but Anurag Kashyap to take this step in making something like this. I’m now eagerly waiting for his next film. To end it, I would want to say, I admire the balls that man has for taking on this magnanimous industry with the attitude that just echoes time and again that ‘I don’t give a f**k about what you have to say’. Yes, it’s an Anurag Kashyap film.

(P.S: If your wondering why have I not spoken about performances, it is because I do not want to rate one higher than the other. Everyone has done their bit well).

One thought on “Shaitan”