To start off, a visit to Pizzeria Romano was pending for a very long time. Somehow I had a notion that it might not be as exciting as its name. I always saw it while I was in Koramangala but never went. However, I dared to go there last night. I now confess that the stupid bheja of mine makes ever more stupid assumptions. It was one of our best eat out session in the recent past.  Food and spice zindabad!

While we walked up the stairs we were all skeptical about what we were indulging in. We had read enough reviews and were in a way relaxed as most of them had said nice things about the place but you know how the human mind works. The minute I saw the interiors I fell in love with it. Rich leather cushioned walls backed the couches.  Ideal for a mushy romantic date. However, we were a group of friends and didn’t want to just kuchi-koo in a corner. So, we took the chairs and grabbed our menus.

There is so much variety. You are bound to get confused over what to order. We though and thought and thought and finally went ahead with Cajun Tuna, Smoked Buffalo Wings, Crunchy Baked Potato and Bruschetta for starters! Yes, our order was unending and the only reason was that the menu was so inviting. We were contemplating if we had to take the Falafel wit Pita Bread, Tabboleh Salad and Hommus. Well, how much would we eat? We ordered the main course as well – wood fried Margherita and Four Seasons (I guess). They have a huge variety of sea food, pastas, steaks and sizzlers as well. But then, how can you go to Pizzeria and not have Pizza.

The steward (we struck good conversations with him when we realized that he used to work at Pascucci earlier. It was a gentle reminder that we hadn’t paid our respects to Pascucci in a bit) humbly reminded us that we had not ordered anything to drink. So, we laid our hands on the beverage menu. We were so doomed. Confusion hit us hard. There were very tempting mocktails and cocktails. I ordered a Pink Lady (apple juice, lime soda, ginger syrup and something else). Sunny asked for something wacky. It also had a combination of ginger, lime, mint and raspberry. Kiran ordered a cocktail and I’m sorry I don’t know its name or its content. 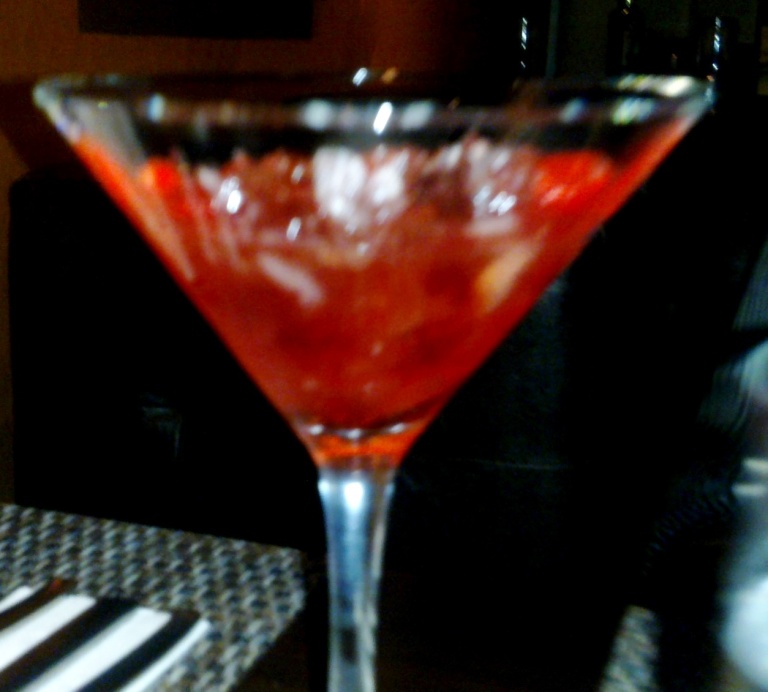 Phew! After ordering so much we were gearing up to develop an appetite to binge and sin. First came our drinks! Colourful and awesome. Then came my crunchy baked potato. Here’s the description. It was baked potato with mozzarella and guacamole. It was simply awesome. The guacamole paste just went so well with the potatoes. Unlike most places there was no overdose of cheese. It was just right. The smoked buffalo wings I believe had a different sauce but tasty. The bruschetta was great too (again not over dose of cheese) and finally the tuna also got great reviews.

Finally we had our pizzas. A simple margherita which I believe no one can go wrong was fairly good. I won’t say it was awesome; but good for sure. I’m a sucker for margheritas and I normally am not very experimentative with my pizzas. Sunny had suggested I tried this pizza named Suicide Bomber. As exciting as it sounded, I had for the first time made up my mind to go for it. I however saw certain ingredients in its description that I was not very familiar with and neither were the staff acquainted with what it was. Hence, margherita was a safer bet! Their pizza was also good (I would rate the margherita at Toscanos higher).

The boys had a bigger appetite this time and decided to go ahead and order 2 more dishes. So, stuffed BBQ chicken and lamb risotto was brought to our table. Both I believe were good. I was just waiting to order my dessert. I had seen the menu and had gone crazy reading it. I picked a Black Bottom Tart! Sound delicious, right? Well, it was a tart with a layer of chocolate ganache and white chocolate ganache. So, the Sunny’s ganache lover couldn’t stop herself from indulging in some more ganachified sin! We had also ordered a Chocolate Mud Cake. Chocolate cake filled with warm chocolate and served with a scoop of ice cream.

My Ganache arrived. I flipped over. Seriously. The presentation had won the battle for me. I really didn’t care if it was even horrible. The plate had 3 elements – a round tart, a shot glass filled with coffee cream topped with pomegranates and another tiny round chocolate coin topped with whipped cream a bulb of muskmelon coated with sugar syrup. First had the muskmelon and whipped cream. Orgasm. Next, the coffee cream. Double Orgasm. The pomegranate added a strange kick to it. The tart by itself was average. I did not pretty much like the white chocolate part. It was good though. 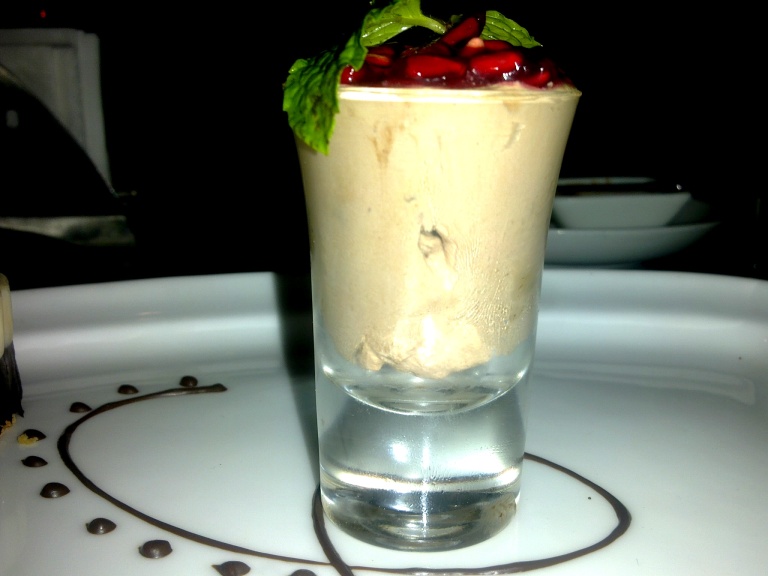 Moving on to the mud cake. I don’t know how long it took to clear off the plate. It was an act of minutes. Short lived pleasure, so to say. That I was told was good as well.

So, after so much eating (over eating) and loving every bite of what we ate, I decided I would rate this a 4 on 5. Also, the pocket might not bear such a big hole. There is ample parking and it’s in Koramangala. I would strongly recommend this place. I would also suggest you order one pizza and share it but also order some other main course. The menu will bowl you over and the food will leave you stumped. It’s awesome!!! Yes, the dessert might end up being the show stopper on most days! Ideal!! Very ideal!! It’s good karma as well!!