2012 has indeed helped me regain my faith in Bollywood. After Paan Singh Tomar came another classic and gripping film, Kahaani, by Sujoy Ghosh. I’m sure everybody has read the reviews, watched the film and loved it. However, you can still read another review. 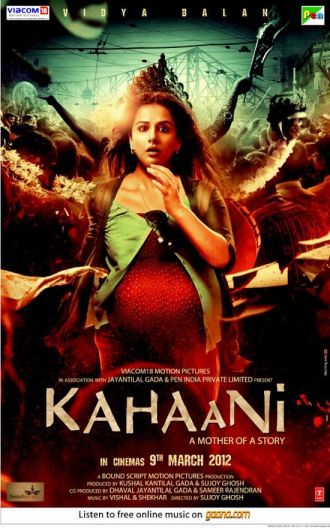 The movie took me by a surprise as most often suspense thrillers have many loop holes and fail to hold on to your attention towards the end. This was contrary to popular belief. Until the last minute (and may be for hours after the film) I was just amazed by the intelligent script & screenplay. Well, it took 4 writers (including the director) to come up with an awesome script. Here again, it beats the popular belief that too many cooks spoil the broth. For the first time, neither Sunny nor me exchanged opinions about the film while watching it.. We were that engulfed into it!

Kahaani is a highly engaging film that subtly teases the intelligence of the audience with pleasant surprises at various instances. As always, no plot shall be revealed in my review other than the obvious that the film centers around Vidya Bagchi’s(Vidya Balan) search for her missing husband. Period. What I loved the most about the film is its characterization & casting. Casting director, Roshmi Banerjee deserves full credit here. Each character is so very well etched out and is so typical to the city that they represent. I loved the performances and it would not be fair to pick just one. However, Parambrata Chattopadhyay (Rana) & Khan (Nawazuddin Siddiqui) deserve a mention. Yes, there is Saswata Chatterjee (Bob Biswas) who is as eerie as can be. I actually would close my eyes almost completely and try to watch with very little scope of being scared whenever he would come on screen!! What a performance. Do I even have to talk about Vidya Balan. She is simply phenomenal and yes, I agree that she is the female Khan of Bollywood! Mind-blowing, intense and gripping performance would just triple her fan base! However, there is a larger character (if I may say so) in the film that has a very prominent role. This character cuts across all others and binds them together to make the film a masterpiece. No points for guessing. I am referring to Kolkata. The narrow street lanes, the colors, the chai-vendors, the glass mugs for chai, the vibrant nature, the people and yes, the Durga pooja, just elevates the status of Kolkata as being just a plain location for the film to being the second lead (or may be the main lead) of the film!! It substitutes for the lack of a prominent hero and yes, Kolkata is the hero of the film. The cinematographer Setu adds to the look of the main character making it seem just so brilliant.

What I also liked is the music by Vishal Shekar. Each one just fits right in and adds to the mood. However, my favorite is undoubtedly, the rendition of Rabindranath Tagore’s Ekla Chalo Re. Amitabh Bachchan’s deep & insightful voice adds a great value to the song and makes it motivational yet emotional & inspiring.

Somehow, there was this moment that made me draw parallels with Madhuri Dixit’s character in Anjaam to Vidya’s character here. Remember the ‘Jab Naari Bane Chandika’ bit? Well, that’s just me!! So pardon the comparison.

Post Kahaani, I’m just glad that we now have a new breed of actors like Nawazuddin (well, he’s an Anurag Kahyap favorite so I don’t think he belongs to the new breed.. but still..) & Saswata Chatterjee. I’m glad that 2012 has finally started to give we film buffs good flicks (I’m sure there is a lot more to come this year. Remember Gangs of Wassepur is still there). I’m glad that unconventional cinema is doing well commercially as well. I’m glad that filmmakers have taken the bold step to invest in such scripts.

Finally, you should watch Kahaani! Period!